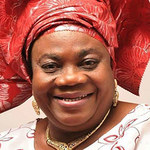 Lanre Hassan popularly known as Iya Awero is a renowned and award-winning actress and stage performer. She was born on October 3rd, 1950. She has over 40 years of acting experience. She featured in both Yoruba and English language Nollywood movies.

Lanre Hassan aka Iya Awero was born on October 3rd, 1950, an indigene of Lagos Island (Isale-Eko), Lagos State, Nigeria. Her full name is Olanrewaju Adesina Hassan, her mother hails from the Bankole family house and her father from Imaro Hassan Afoke family house of Lagos Island. Lanre Hassan was raised by her paternal grandmother named Kosoko Moronfolu Okunoye, she is from a polygamous home.

She is popularly known as Iya Awero owing to her role is the well-watched television comedy series "Comedy Half Hour", by the Ojo Ladipo theatre group.

She relocated back to Lagos for secondary school education, attending the Molas high school in Lagos Island (Fadeyi area of Isale Eko). She started acting while in high school, she was opportune to meet the English Literature Nobel Laureate Wole Soyinka, who introduced her to his School of Drama.

Lanre Hassan (Iya Awero)  joined the School of Drama upon finishing her high school education. The program was for 6 months. She didn't further her education after this school, missing out on the opportunity of gaining direct entry into the university at the time.

Her acting career was met with resistance from her parents and guardians in the early days, it took the much convincing before her guardian the Late Olayemi Shashegbon (Mrs. Berkeley) finally consented and convinced her parents to accept her career choice.

She met the Late Ojo Ladipo (Baba Mero) while in the School of Drama, upon graduation, they with some others (like Tawa Adamson, mother of the famous fuji musician Pasuma ) started a drama group named "Young Star Concert Party" in 1964. In 1966, they elected the Late Ojo Ladipo as the leader and changed the group name to "Ojo Ladipo Theatre Group".

Lanre Hassan (Iya Awero)  also faced career resistance from her late husband upon marriage, he was later convinced by Late Diran Ajijedidun (of the NTA) and Bank Olemo.

On the passing of Baba Mero in 1978, the group elected Adebayo Salami commonly referred to as Oga Bello as the group leader, the group also changed the name to Awada Kerikeri Theatre Group. Oga Bello had earlier joined the group in 1964.

In 2018, Lanre Hassan featured as "Iya Loja" in the crime blockbuster movie titled "King of Boy", directed by one of Nigeria's leading female director Kemi Adetiba.