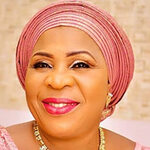 Fausat Abeni Balogun popularly known as Madam Saje is a veteran Nollywood actress, writer, and producer. She was born on the 13th of February, 1959. She has over 40 years of stage and movie acting experience. She features mostly in Yoruba movies.

Alhaja Fausat Abeni Balogun commonly called Madam Saje is a veteran Yoruba movie actress, writer, and producer. She hails from the Oke Ode suburb of Ifelodun Local Government Area of Kwara State. She was born on the 13th of February, 1959 in Lagos State.

She is wife to the veteran Yoruba actor and producer Rafiu Balogun, mother to Nollywood actor, writer, producer, and director Afeez Balogun and Yoruba actress and producer Bintu Balogun.

Madam Saje started off her acting career with stage acting immediately she finished primary school, her first training in the trade was under the late Mashado the leader of the theatre group called "Ijamodi" based in Idumota area of Lagos Island, Lagos State. She later trained under actor and producer Rafiu Balogun, he leads the "Balogun" Theatre Group. The two later got married in 1979.

In 1979, Fausat Abeni Balogun got her big break when she featured in a television movie titled: "Abeni Ajagun", produced by her husband. The movie received a lot of positive reviews and its success shot her into the limelight. The public started referring to her by this cast name.

In the 1990s, she starred in the comedy television series "Erin Kee Kee" as "Mama Saje", she is often referred to by this cast name to date. The name was given to her Babatunde Omidina, he starred as the popular "Baba Suwe".

She started her producer career by producing the movie titled: "Alaroka", directed by the late Prince Alade Aromire. Other productions are "Oro Itan" and "Ebi Dapo".