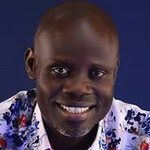 Emeka Joseph popularly known as "Indo" is an award-winning movie soundtrack songwriter and performing artist. He was born and bred in Ikeji-Arakeji town, Oriade, Osun State and he hail from Delta State. He is known for Yoruba movie soundtracks like "Asiri Kadara" (2018) and "Kesari" (2018).

Emeka Joseph popularly known as "Indo" was born and bred in the Ikeji-Arakeji town of Oriade Local Government Area of Osun State. He hails from Delta State with both parents from the same state.

He is an award-winning songwriter and performing artist. He is currently working on releasing his first music album.

He had his primary and secondary education in Osun State.

He is a graduate of Music from The Polytechnic Ibadan, Ibadan, Oyo State.

In 2019, he won an award for The Best Movie Soundtrack of The Year in the Best of Nollywood (BON) Awards for the soundtrack of the Yoruba movie titled: "Return of Kesari", written and directed by the award-winning actor and director Ibrahim Yekini (Itele d icon).