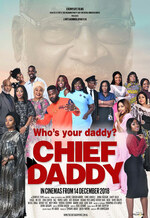 When a billionaire industrialist (Chief Daddy) suddenly drops dead, his large polygamous family, relatives, collections of mistresses, and household staffers were eager to know the content of their benefactor’s will. Ego clashed as various beneficiaries showed up to lay claims to their share of his wealth. However, Chief Beecroft has a big surprise for them all.

Chief Daddy is a Nollywood blockbuster comedy film, released on December 14, 2018, directed by Niyi Akinmolayan, produced by Mo Abudu and Temidayo Abudu, and written by Bola Asiyanbi. The movie premiered at the Oriental Hotel, Victoria Island, Lagos. The movie was produced by EbonyLife Films and distributed locally by FilmOne Distributions, on March 15, 2019, was acquired by Netflix for online distribution.

Netflix acquisition of Chief Daddy makes it the third movie produced by EbonyLife Films that is acquired by the giant online movie streaming platform, others are the movie Fifty (2015) and The Wedding Party (2016).

Chief Daddy has some notable records to its credits:
The comedy movie took No. 1 spot in the box office, grossing over ₦40 million (precisely ₦42.6 million) in just 3 days, making it the second highest-grossing movie in its opening weekend for the year 2018, surpassing the previous record-holder: The Wedding Party.

This makes it the third-highest in Nollywood history (as of December 2018) and fifth movie by EbonyLife Films that would take number 1 spot in the Nollywood box office.

The movie went on to set a new record when it amassed a whopping ₦115.7 million in ten days, it also maintained No. 1 position since release in Nigeria and Ghana box offices for the same period.  EbonyLife Films owner and Executive Producer of Chief Daddy, Mo Abudu broke the good news herself via an Instagram post. She further stated that the production team delivered on their promise of GIFT OF LAUGHTER.

Niyi Akinmolayan, the director of the movie has delivered yet another masterpiece, Chief Daddy is another feather in his cap. Niyi had taken giant strides since his disastrous directorial debut in 2008 with the movie KAJOLA.

Chief Daddy is the second box office No. 1 for Niyi in the same calendar year, The Wedding Party 2 – Destination Dubai was the first.

Mo Abudu, the executive producer of Chief Daddy has never failed to deliver; this comedy movie is no exception. Mo just seems to understand what the audience wants, all her movie projects have recorded resounding successes.